Are secret sacrifices to civilisation

Those lives abandoned and forgotten

When time crawls on pillars of Parthenon

Under the fallen statue of Athena

Fossils meander into the tree of life

With the rapid progress of urbanisation and globalisation, our technology has accelerated the development of modern structures as well as the isolation of human lives from nature.

From birth to death it is becoming commonplace for a human being to live their entire life in a confined space in the urban city, nurtured by the convenient supply of goods by advanced logistics systems, but without any knowledge of the products' natural footprint.

There are also many urban citizens who are longing for a countryside life and nature, but find themselves tied to routine office tasks, processing excessive information for computers, or avoiding unnecessary social contact in the crowded public transport systems. In these situations, they often seek comfort in objects such as a cactus desk plant, or rely on the companion of headphones to restore their internal zen,

Yue Cui took inspirations from wild lives leaping and running in the forest. In her jewellery collection "Animated Companion", she has designed a series of characters. Each piece has its own "mechanical riddle" to interact with its wearer and stimulate an emotional attachment.

Yue's design is of a contemporary abstract style, which comes from her drawings of animals in different postures. Through detailed analysis of every stage of animals' movement, she created a series of sketches of animal figures as a whole as well as individual limb parts to gain a detailed understanding of the design elements. 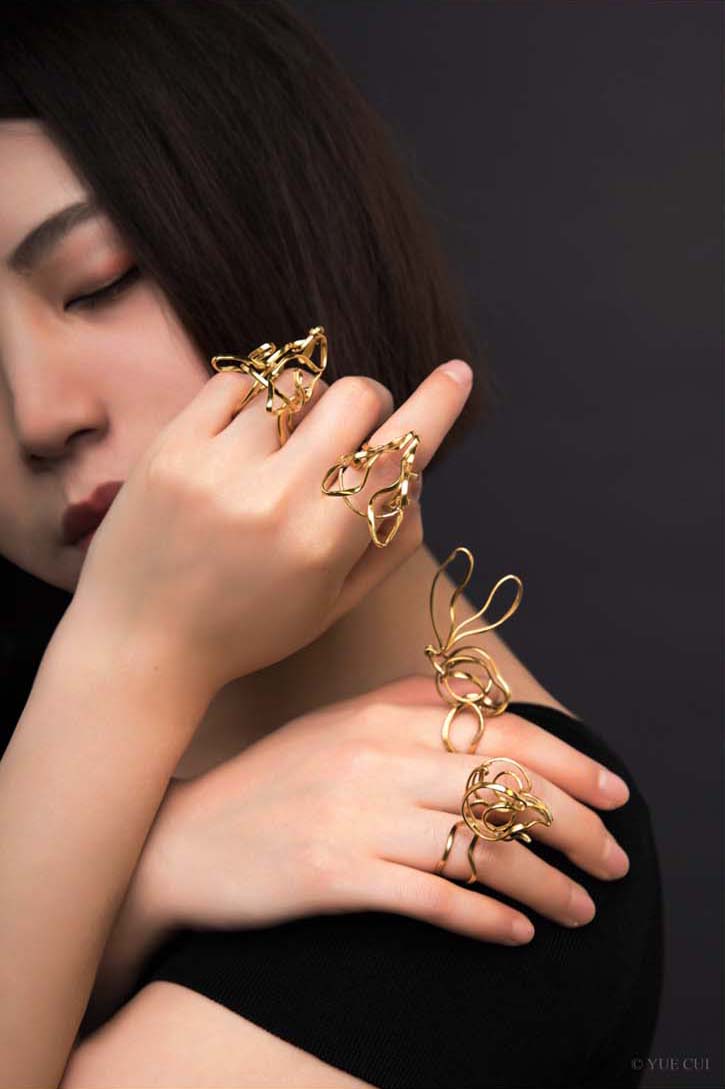 Each character in the ring collection has its own flexible connection and hidden mechanism for the wear to interact with. For example, the beak part of the bird ring can be opened and moved with the wearer's fingers.

Similarly, the tongue part of the dog ring is also movable. For the hare, the secret is in its ears.

The poetic abstraction of animals has opened more possibilities for Yue to express idea of "motion" and the liveliness of animals via transformation - recombining the elements to create new forms.

In her design of necklace, each chain element correspond to a different posture of a running hare, and the whole necklace animates a continuous movement of a hare.

And the necklace can be opened into two ear-ring pieces. 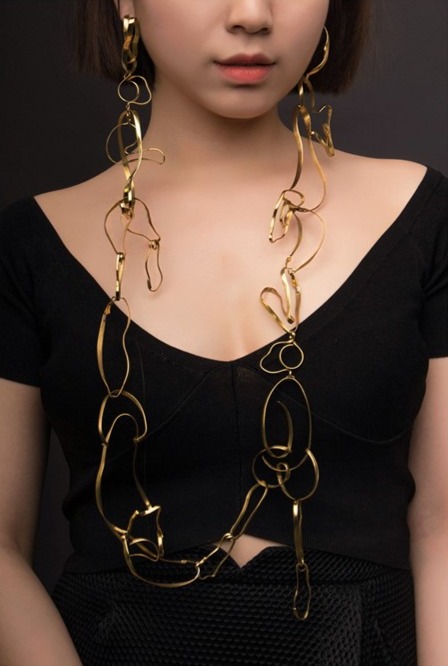 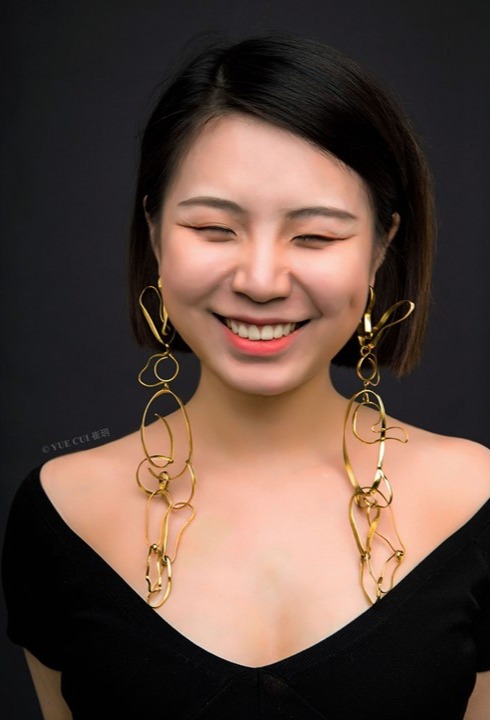 To give wearers more accessorizing flexibility, Yue also used the clasp mechanism in most of her pieces, so they are multi-purposed. The fox bracelet could be a little companion around the wrist, or a brooch crouching under the collar.

Wearers are encouraged to unleash their own creativity to combine different pieces to tell their own stories.

Yue's interest in the theme of life can be traced back to her earlier work “Museum of Life” which is a glass jewellery collection combining earrings and necklaces.

The idea first came up when she encountered preserved animals in a museum. Those dead bodies were kept in such vivid postures, which gave her a complicated feeling about what life is. And later when she learnt to deal with a fragile material -- glass -- similar thoughts were awakened again, as she realised those beautiful objects which have a tough and solid appearance, could still easily disappear and scatter like clouds.

However, after Yue spent more time working with glass, she also discovered a new meaning in its fragility. That is, when broken glass is put into fire, it can re-emerge and gain a new life. This experience also influenced her view of life. She realised that although death is putting an inevitable end to one particular form of life, tracing their past existence and preserving those evidence of life, is also a process of creating a new form of existence for them, just like rebirth.

To implement her ideas, Yue has devoted herself to exploring new techniques of glass making and merging kiln-cast glass with different materials such as bones and metal through controlling the firing temperature and the component proportions. One would easily immerse oneself in a melancholic dialogue between life and death through the fragile and delicate pieces in Yue's collection “Museum of Life”.

Interview with the Designer

Could you tell us a bit about your background?

I'm a jewellery designer and maker based in China. I completed my MA Degree in Jewellery Design at Central Saint Martins (UAL) in 2018 after the BA Degree in Arts and Crafts at Tsinghua University in China. I am about to launch my own contemporary jewellery brand CUIOOYUE.

How did you get interested in fashion and jewelry design in particular?

My mother told me that when I was a baby I was always attracted to shiny earrings and wanted to touch them. That's a really interesting coincidence, as when I grew older I was fascinated by handicrafts and attracted to jewelry again. Then I realised that jewelry forms an intimate relation with the human body and also carries emotional attachment and powerful expression of the inner personality, so I'd like to design and use jewellery as a language to express my little world.

What are the most important things you learned at Central Saint Martins?

Jump out of your comfort zone -- I have learnt to reflect my works over and over again, and embrace new challenges as they always bring me with new inspirations.

What are the challenges of your creative process?

One of the key concepts in the design of my jewellery collection "Animated Companion" is "moving", and how to illustrate this concept was the biggest challenge in the whole creative process.

I did a lot of experiments to design the flexible connections and hidden mechanisms in my jewellery pieces, in order to increase the interaction between the wearer and the jewellery pieces.

But how to achieve an accurate control of the looseness, specific gravity and the hidden position of the mechanisms imposed another challenge experimentally, which required me to make constant adjustments in my design and making process.

How do you develop ideas for your work?

My designs are abstracted from my drawings of the animals. By analysing every step of the animals in motion I could derive individual elements to assemble the design of the whole figure.

Is there a particular style you are most interested in developing?

I think a good design can surprise people in their details, so I would like to continue developing the flexible connections and hidden mechanisms in my design.

What are the areas you would like to explore in your future projects?

In my previous work, I enjoyed using glass as the main material to express the fragility and reincarnation side of natural life. In the "Animated Companion" collection, to express a strong long-term companionship, I decided to use metal as the main material which could illustrate curve dynamics and enhance the durability of the pieces.

For my future projects I would like to explore the possibility of combining metal with glass or gemstones to enrich the theme of life.